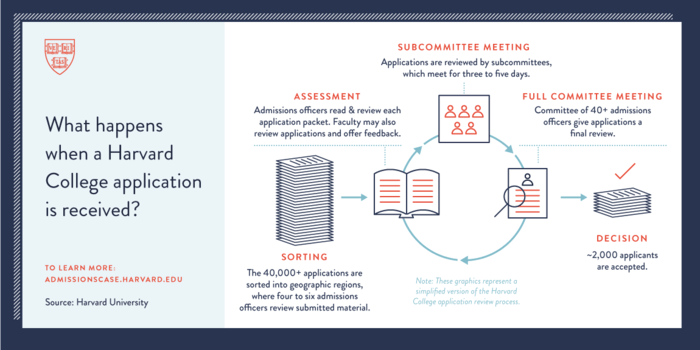 Last year, I was able to view my actual Harvard Admissions file through a Student Records Request, and I have several friends who work/have worked in Harvard’s Admissions Office. Thus, I've been able to learn a ton of inside knowledge about the Harvard admissions process, as well as dispel some common myths propagated by college counselors, teachers, parents, and Harvard itself.

In this article, I'll detail everything I learned first-hand about Harvard's admissions process, and tell you exactly what goes on in the committee room when your application is being voted on. 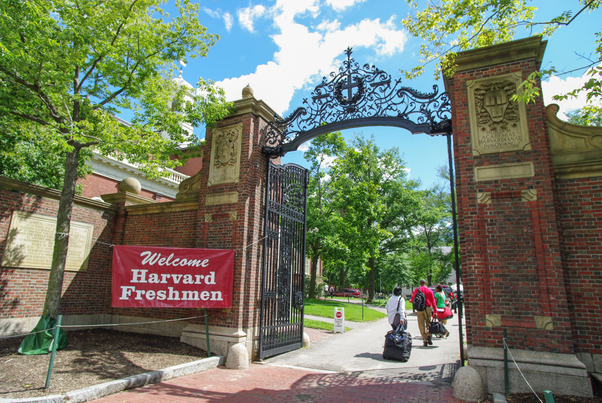 Freshmen walk through Johnson Gate while moving into the Yard during Opening Days. (Image Source)

Though personal details below have been blurred out, you can get a general sense of what is on the one-page "summary sheet" that Harvard makes for every applicant in the image below. This summary sheet is given to every admissions officer so that they can quickly reference the overall strength of your candidacy when debating the merit of your admission in committee. 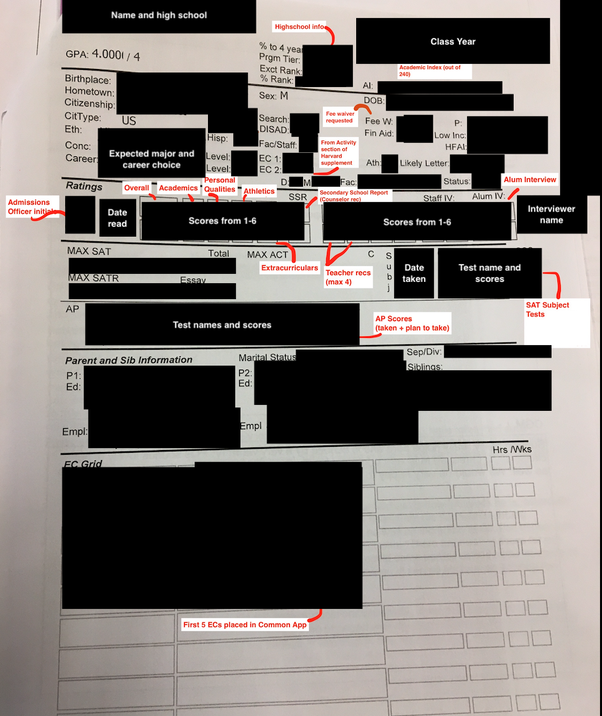 Screenshot of my actual Harvard Admissions file. Sections of the summary sheet have been annotated to describe what you will be graded on.

The Harvard Admissions committee will grade you on 4 metrics . They are as follows:

For each of these metrics, you will be assigned a score of 1–6, where 1 is the best and 6 is the worst.

So which metric you should be optimizing for?

According to a friend who worked in the Admissions Office, it is the "Personal Qualities" metric that is the most underrated by applicants.

In fact, "Personal Qualities" actually ends up having the biggest impact on borderline admissions decisions. 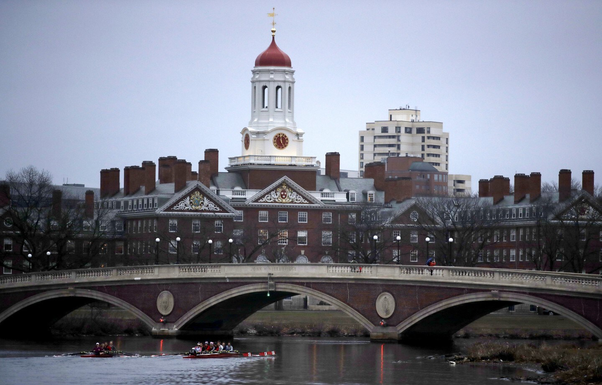 View of Dunster House, a Harvard undergraduate dorm, from across the Charles River (Image Source)

The reason for this is simple — if you’re a 1 in any of the other categories, you’re most likely going to get accepted anyway. (1) Recruited athletes (with a 1 in “Athletics”) will receive a likely letter from their coach months before admissions decisions come out, and are essentially guaranteed a spot. (2) Academic superstars who’ve published papers, proven unsolved theorems, or won prestigious competitions are also a pretty solid lock to be included in the incoming class. (3) Finally, students who’ve excelled in leadership positions in intense extracurriculars , i.e. founding a company or leading a charity or getting elected to a national position of a high school organization, are also much more likely to be admitted. 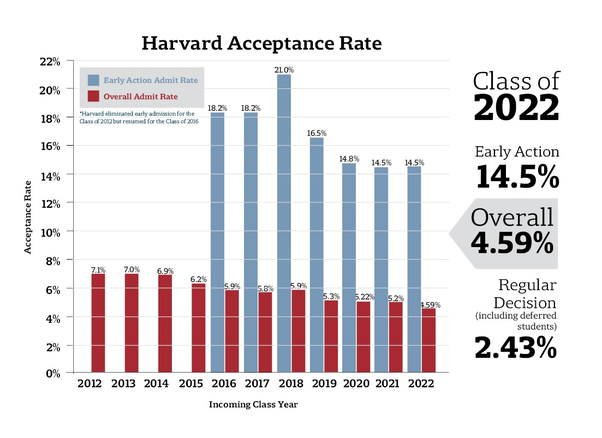 So what if you’re not one of those kids?

Well, after throwing in spots reserved for the children of prominent politicians, billionaires, and mega-donors on the dean’s list, you now have very few spots left for amazing students who aren’t quite “prodigies.”

These students would be considered “very smart” and “Harvard material” in their high schools, but not labeled “prodigies” or “child geniuses,” and wouldn’t assume their admission is “guaranteed” by any stretch of the imagination.

According to the Washington Post, this ends up being the vast majority of applicants.

These students will get a handful of 2’s and 3’s across the four metrics. That puts them in the running for admission, but their profiles could be easily swapped out with another student who has 2’s and 3’s, and you wouldn’t be able to tell the difference. 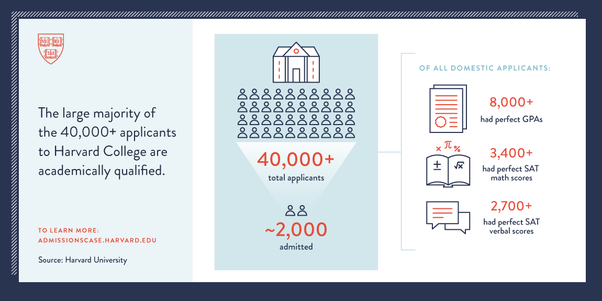 This is where Personal Qualities really stand out.

At this level, everyone is a great student, participates in extracurriculars, and has won some honors/awards. They can do the academic work at Harvard, no question. 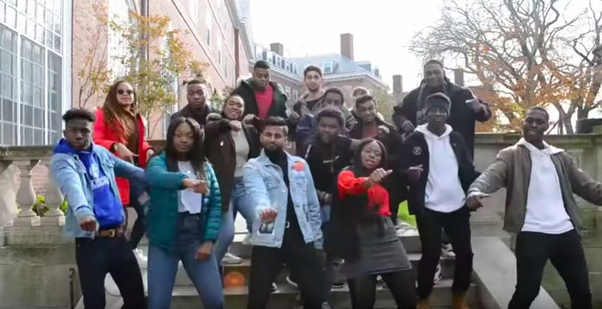 Screenshot from a Student Government campaign video that went viral earlier this year, with celebrities like Dwyane Wade, Chris Paul, and Kerry Washington retweeting the video. The students who posted this video won a surprising, come-from-behind victory to take the Presidency and Vice Presidency for 2020. Watch the video here and read a CNN article about it here

Harvard wants interesting people who will get along with others, bring unique perspectives to the table, and add something unique to the make-up of the class. If another applicant has the same personality/interests/motivations as you, then your spot will get taken by that applicant. Or the 10 others with identical essays about why they want to go to medical school or why they’re passionate about a certain subject or how they coped with a family member who went through a hardship.

Your essays, teacher recommendations, and interview are incredibly important for Harvard. More so, in fact, than they are at any other Ivy League college (from what I’ve been told by friends in the Admissions Office).

If you have any more specific questions or want to see other parts of my Harvard application, feel free to message me and I’d be more than happy to answer questions.

To learn more about my Harvard admissions journey and the tips/tricks I’ve learned along the way, check out the other posts on our blog .

Or, if you want to learn these secrets yourself for your own college applications, check out the services we offer

How I Got into Harvard 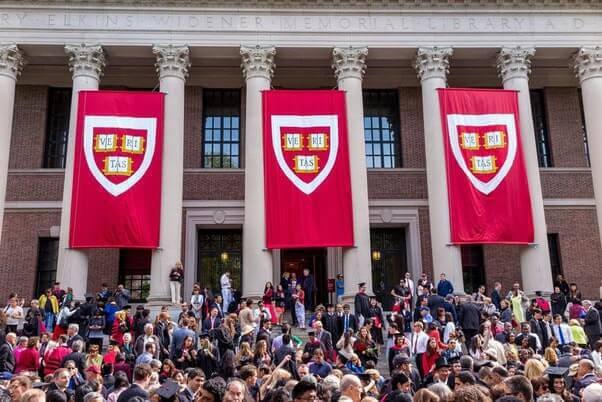 "You'll never get into Harvard," I remember my English teacher chuckling.

It was if my expression of interest in the university had been the punchline of a joke.

Yes, it was devastating to hear. But it was the motivation I needed.

Less than a year later, I was fortunate enough to open up a letter from Harvard Dean of Admissions William Fitzsimmons informing me that I had been accepted to one of the most prestigious universities in the world.

I was completely floored as I read the words "Congratulations" at the top of my letter. I couldn't believe my luck, and was certain they had made a mistake.

That nagging doubt constantly lingered in the back of my mind during my freshman year at Harvard.

Why had I been chosen over thousands of other students who probably deserved this more than me?

Who made the decision that I belonged at Harvard?

What was I supposed to uniquely add to the incoming class?

What was the secret to my acceptance?

As a Harvard student, you are allowed to view your admissions file by submitting a Student Records request . I did this out of curiosity, and was shocked by what I saw.

In this post, I'll share what I learned about my own personal admissions journey, as well as the metrics that Harvard uses to evaluate and rank candidates. Hopefully this gives you a better sense of how you'll be evaluated, and sheds some light on this mysterious process.

But first, some context:

Harvard assigns each applicant a numerical score (1–6) across four metrics (Academics, Extracurriculars, Athletics, and Personal Qualities), your teacher and school counselor recommendations, and your interview performance.

A score of 1 is the "best," while a 6 is the "worst." See this Quora post from an alumni interviewer for more context on what scoring a “1” means/how rare it is.

According to my admissions file, it was my interview and my essay that distinguished my application and secured my acceptance to Harvard.

A screenshot of my Harvard Alumni Interview write-up is below. 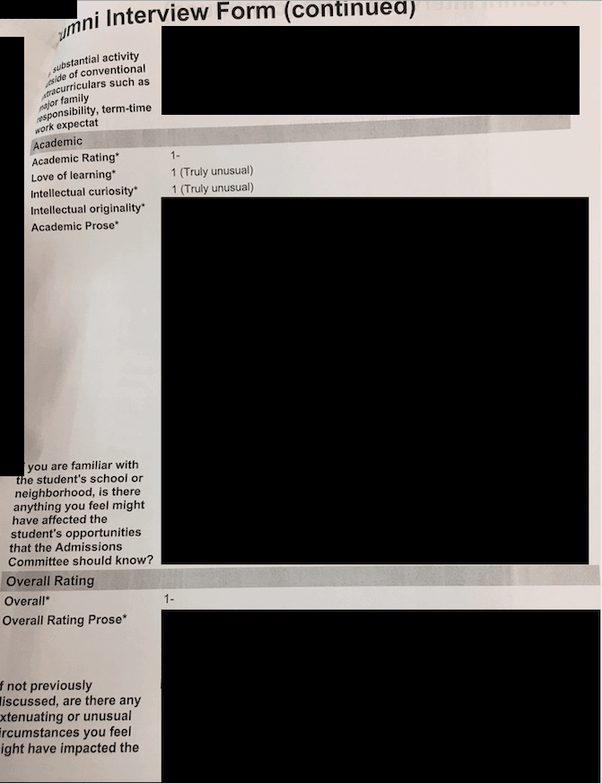 My interview went extremely well, way better than I could have possibly dreamed.

At the time I didn’t think much of it — the conversation had flowed naturally and I thought I made a good impression, but I didn’t realize just how well I had done until looking at my admissions file several years later while a student at Harvard.

Overall, my interviewer remarked that I was probably the “most exceptional” candidate she’d seen in almost a decade of interviewing, highlighting in particular my “intellectual curiosity, internal drive, and creativity.” There were three main themes she highlighted in her write-up:

(1) Structure: In particular, I think that she liked the structured way I answered her questions. I had spent the week prior practicing how to walk through my resume by telling a story, linking everything I’d done into one coherent narrative.

(2) Coherent Narrative: She also highlighted my ability to synthesize the various fields I was interested in or had done in high school (e.g. debate, research internships at national labs, academic summer camps) into Harvard-specific goals.

For example, I had done a lot of debate and STEM research in high school, and so one of my goals was to work at the intersection of technology and policy after graduating. Tying this back to Harvard, I mentioned the Berkman Center for Internet and Policy as a resource I’d love to take advantage of, as it is one of the foremost research centers on Internet policy in the nation.

She highlighted my ability to “synthesi[ze]” my interests, future goals, and past experience as “especially stand-out,” and I think this ability to tie my life’s story up to that point into one big arrow pointing at Harvard was the key in earning such a favorable rating. 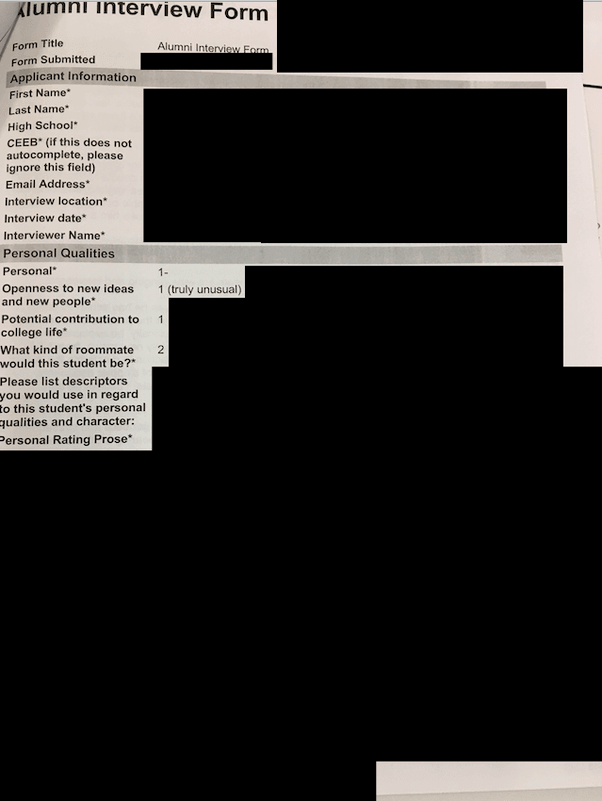 (3) Easy Flow of Conversation: By keeping the conversation constantly flowing and turning the interview into a dialogue with my interviewer, I was able to keep her engaged and invested in our conversation.

For example, I had looked up my interviewer beforehand, so I knew that she worked in healthcare policy. So, when she asked me about my interest in statistics and math, after answering her question I then flipped it and asked her how these subjects factored into her day-to-day work on health policy.

After she mentioned a research report on health insurance, I piggy-backed on her comments by mentioning a few news articles I’d read recently about the same topic, and we had a great back-and-forth on how her time at Harvard shaped her desire to go into health policy, and what she wished she had done more of as an undergrad to prepare her for her current role.

Doing research beforehand was incredibly valuable, as it ensured that I would always have something to say/ask her about whenever there was a lull in conversation. Above all, however, my main advice (in addition to researching your interviewer beforehand) is to just be a normal, social, affable human being like you normally are. 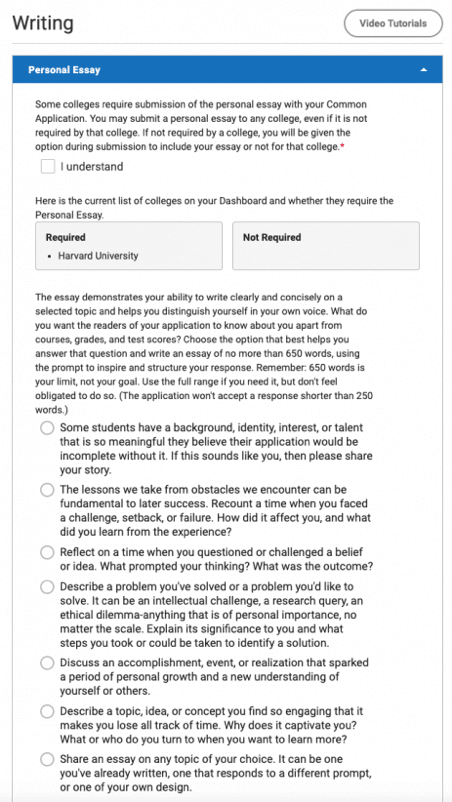 I was very proud of my Common App essay, as I thought I did an effective job of capturing why I was interested in both Statistics and the intersection of technology with law/public policy.

If you want direct feedback on your essays from Harvard students, or want to work 1-on-1 with an experienced mentor to craft your application, visit us here.

I purposely tried to make my supplemental essays much more light-hearted/humorous to showcase that aspect of my personality, and I think that helped round me out as an applicant, especially as someone applying with a more traditional STEM background.

I wrote, edited, and revised my essays over the span of about 6 months.

The first 4 of those months were spent writing a dozen or so drafts that I ended up scrapping completely, but going through that process and getting feedback on my essays was essential for channeling the mindset of an admissions officer and making sure that I hit all the right notes in the final version I submitted.